Page 241 was a Sunday and with my family helping me clean the building last night, I didn’t  have to go in early to get that done.  Our Sunday School class covered the second chapter of Esther this morning which may contain the first record of a national beauty pageant.  The story of Esther reminds me a lot of the life of Joseph.  Two different people who found themselves in circumstances not of their own choosing, yet through obedience and faithfulness found themselves used by God to save the Jewish people.  Neither probably immediately thought about how God would use them when they found themselves in circumstances not of their choosing, but both stories give us great quotes about the hand of God being able to work in all circumstances.  In Joseph’s case, when he finally reveals himself to his brothers so he can bring the entire family to Egypt to save them from a severe famine, he tells them, “what you meant for harm God has used for good.”  Joseph understood that while the treatment he endured was not right, his brothers actions were carried out with evil intent, and others had tried to destroy his spirit; God was not caught with His hands tied and unable to carry out His plans.

With Esther’s story, we find a reluctant hero that needs encouragement to risk everything in the hope of making a difference.  She doesn’t seem opposed to doing the right thing, she just wants to make sure her actions will be the right thing and will make a difference.  While the most common quote out of the book of Esther is Mordecai’s words, “Who knows but that you have come to royal position for such a time as this?”, more meaningful to me is Esther’s response in calling for all of the Jews to join together in prayer through fasting for three days before she would plead her case before the king.  After receiving the encouragement of a nation joined together in fasting she is willing to go before the king with the attitude, “If I perish, I perish.”  When we are seeking to do God’s will, it would be good for us to call together people who will join us in prayer and fasting for a period of time.  It is also important that we reach a point of action through the encouragement that comes from God through the time we spend together listening through fasting.

After the Sunday School class, we gathered for our morning worship gathering at Deer Run where David brought a message out of Ephesians 6 which covered what is commonly referred to as the “armor of God” passage.  Part of the message focused on our need to know our enemy.  It is easy to forget that our enemy is not other people, rather our enemy is the evil one who does battle in the spiritual realm.  This enemy uses deception and accusation in ways that often lead us to battle one another instead of putting on the full armor of God and standing firm against the devil.  The battle that wages is not one we have to fight alone and not one that we must face unprepared.  God has given us everything we need through Jesus to not only stand firm against the attacks of the enemy, but after everything has been hurled at us, to be able to still stand.  All of our ability to stand in the midst of a spiritual battle and come out victorious comes from our putting on Christ on a daily basis and is tied together through a lifestyle of prayer.

Following the church service, it was time for lunch and then a restful afternoon on a wet, drizzly day.  Since I didn’t make it out to take any new photos, the photo for today’s page is one I took Friday at Potato Creek.  The calm water created beautiful reflections of the clouds, blue sky, and trees.  As I looked closely at the shoreline around the lake, I could begin to see signs of color change in the trees. While most days still feel like summer, the signs are beginning to point to a change of seasons coming soon.  As I read scripture and pay attention to the events around me, I believe the signs are pointing ever more clearly to an ever-increasing approach to the return of Jesus.  Are you ready? 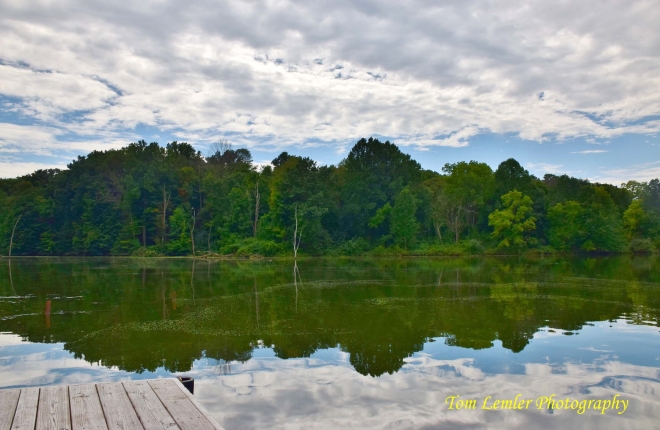