Page 176 has been a good day, but a long day.  I was up early so I could finish the last of the cleaning for the weekend so the building was ready for the Sunday morning worship gathering.  After the cleaning work was done, I packed the truck with the Impact Prayer Ministry display and resources for the North American Christian Convention.  Once I had everything in the truck that I needed — at least I hope I have everything I will need — I headed back home to get myself cleaned up.  When I was ready for the day, it was on the road to Cassopolis, Michigan to preach at the Pleasant View Church of Christ.

I made it to the church in time for Sunday School, where the class I sat in on was looking at 1 Samuel 15 with a focus on our need to be obedient to God’s authority.  Unfortunately, I suspect that most of us are more like King Saul than we like to admit.  We know what God’s Word says but somehow we think our way, which is different, is the same as God’s way.  While Saul did not follow God’s instructions, it seems that in his mind he did.  In fact, he tells Samuel that he had indeed done everything that God had said to do.  When Samuel pointed out specific actions that were not what God had commanded, Saul became very defensive and when Samuel didn’t back down, Saul eventually tried to shift the blame to others.  Sound familiar?  Many today have one excuse after the other when it comes to why they believe a compromise of God’s Word is necessary.  Many are willing to accept the teachings of another simply because they are a good person — holding fast to sound doctrine seems to carry little weight.  Even while we look back and wonder how various institutions that began with a sound Christian foundation have strayed so far from the truth, we seem blind to the practices that led them there — and will lead us there.

After the Sunday School class, I shared in a great time of worship with the Pleasant View congregation.  During the worship gathering, I shared a message focused on prayer and living in such a way that prayer becomes a lifestyle rather than just an activity.  Following the church service, it was time to hit the road and begin my trip to Kansas City for the North American Christian Convention.  As I drove, the sky was once again filled with the big white puffy clouds set on a brilliant blue background.  With a little over 8 hours of road time ahead of me, I decided a couple stops along the lake to take some pictures wouldn’t extend the travel time all that much.  Today’s photo is from my first stop as I looked down a wind-swept sand dune across Lake Michigan toward Chicago.  The fluffy clouds were behind me and over the Chicago skyline but the sky over the lake was primarily clear blue.  It was a good stop to unwind a bit from the morning’s activities before continuing my journey down the road.  After an eventual stop for lunch, I finally made it to my stopping point for the night just after the sun had set for the day.  The writing of today’s page is part of my “unwinding” process tonight and hopefully I will be able to sleep soundly in preparation for some busy convention days. 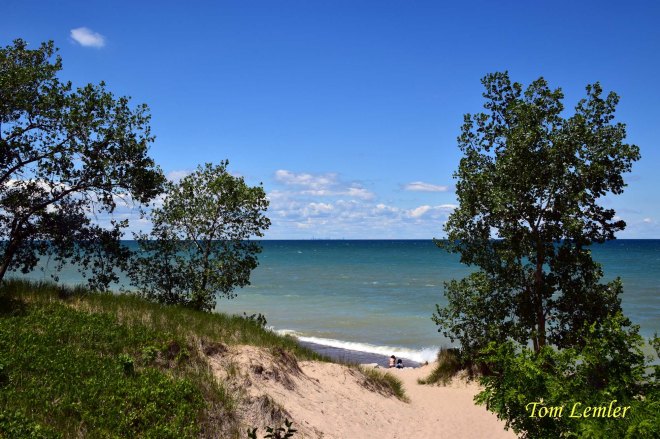