The cold wind continued to blow throughout the day as page 340 prepared to usher in some winter weather.  God brought a number of people to mind as I went about my morning prayer, cleaning, and building prep tasks with the song lyrics, “For you I am praying, for you I am praying . . .”, being part of the soundtrack that accompanied my morning as I worked.

After the building was ready for the day, I turned my attention to some writing.  The first week of devotions in the new book I am working on will be about serving with compassion.  While there are a few people I know for whom this seems natural, I think most of us struggle with true compassion.  Oh, we may practice a form of it with people who are close to us; but for the casual acquaintance or stranger, compassion is often not the first response to their hurt and suffering.  It is far easier to point fingers, assign blame, or even try to fix the situation without ever joining them in their pain.  I’m not sure pointing fingers is ever helpful; but yes, there is a time to attempt to discover together the cause and come up with a solution but that comes after compassion sits with them and helps to carry their burden.

As I wrote, I received some follow-up from a prison chaplain regarding an offer I made to send some materials.  For some reason, I have received a number of requests for Bible reading calendars from inmates at a correctional facility in Florida the last couple of years.  The requests have been very specific, so I suspect someone must have picked up one of these calendars at a convention a few years ago and passed it along and then word has slowly spread as the calendar was seen by others or shared with them.  Anyhow, after receiving a handful of requests already this year, I sent an email to the prison to see if I could sent a packet of the calendars and perhaps the chaplain could get them to the individuals requesting one.  The response I got back was from the chaplain and said that I could send the calendars . . . and there were about 750 inmates who would love to have one!  Well, I didn’t even start with that many calendars printed and many of them have been given away, so I responded with a message of what I actually have available to see if that would be suitable without causing problems.

After my workday was over, I picked up some supplies for the next day and then made my way home.  The wind was still blowing so we decided to head to Lake Michigan for the evening to capture some sunset photos and see if the waves were worth photographing as well.  Today’s photo is one that I captured as a wind-driven wave crested the top of the lighthouse in St Joseph, Michigan.  As the temperature drops, waves such as this will eventually cover the lighthouse with ice.  While cold, it was a beautiful evening as the sunset lit up the sky as well as the waves that formed.

One of the advantages of this season is that the sun sets so early in the day that it wasn’t all that late by the time we made it home.  I spent the rest of the evening going through the photos I had just taken.  With the potential of snow in the forecast, which would mean extra work in the morning, I decided I would write this page the next morning and I went to bed after I was finished with the photos.  As I finish up the writing, the snow has begun to fall . . . but that’s a part of the next page. 🙂 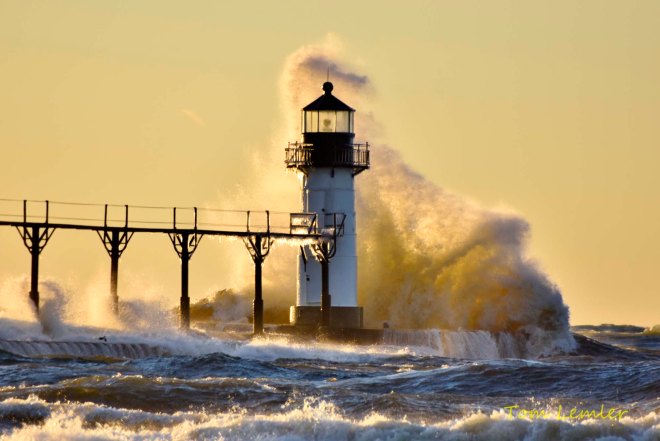