Page 93 was a spring break family adventure day.  We spent what ended up being a mostly cloudy and rainy/drizzly day driving around taking photos with an occasional short hike to photograph a point of interest.  The primary photo theme of the day seemed to be waterfalls — which ends up being a very good choice for a rainy day.  Some of the waterfalls we photographed probably would be considered “seasonal”, meaning they dry up to a trickle or less through the summer months.  A rainy day during the spring, however, produces an abundance of falls with a good volume of water over each one.

With all of the waterfall photos, it was too hard to choose so today’s photo is of a bridge that spans the New River Gorge in West Virginia.  It is said to be one of the longest single span bridges in the United States.  Some bridges are impressive as you drive over them, with visible massive support structures rising above you as you drive.  This bridge wasn’t one of them.  From the driving surface, this was just another section of four-lane concrete highway with a great view on either side.  The impressive part isn’t even noticed until you view it from the side and/or underneath.  As I watched some video of its construction, my first thought was a bunch of well-trained adult boys playing with a giant erector set. 🙂  Only this wasn’t play.  This was serious work that required each piece to be properly placed and securely fastened together.  When completed, this bridge turned what had been a thirty minute drive down one side of the gorge, across the river, and up the other side of the gorge into a thirty second trip.  As I let that fact sink in, I first thought about how valuable we have made time but then after driving the old route down into the gorge and back out, I thought about the transportation of goods via truck that can now cross the gorge that never could have made the trek down and back up with the variety of hairpin curves and switchbacks.

Later in the day I found myself with a slight dilemma at a toll booth.  I had put the correct amount of change in the collection hopper at the toll plaza and crept forward anticipating a green light — only the green light never came.  Traffic was backed up behind me so close I couldn’t back up and put more money in and it didn’t seem right to have to do that anyway.  So, after waiting for what I’m sure seemed like forever to the guy behind me, I went on through half expecting to be pulled over down the road by the cop that had been sitting in his car just prior to the toll plaza.  But no flashing lights appeared in my rear view mirror and after a while I was able to quit glancing over my shoulder expecting to see those lights.

After a long day, I spent a little time going through the over three hundred photos from the day before deciding I was too tired to write the day’s page.  So here I am just before five o’clock the next morning, awake and writing. 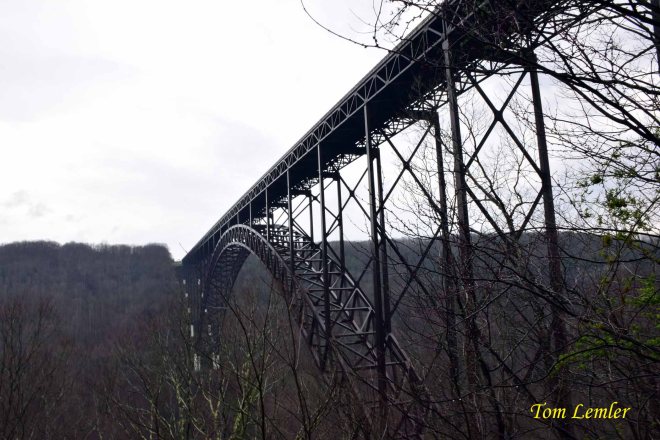