Page 360 began sometime in the middle of the night or early morning hours as I woke up to the sounds of Susan having a seizure.  After sitting with her and making sure she came through it and could go back to sleep, I also went back to sleep and managed to sleep in longer than I have for quite some time.  Once I woke up I took care of some of my usual morning postings and then began to get things ready for the Lemler family Christmas gathering.

Once the truck was packed, we made a quick stop at Meijer to pick up the remaining supplies I needed to make home-made ice cream.  Home-made ice cream has been a Lemler Christmas tradition for a lot of years now and I suspect there would be some rather disappointed family members if the ice cream freezer didn’t show up.  🙂  After we ate lunch, it was time to bring out the ice cream maker and this year we went back to the hand crank.  The last few years the electric motor didn’t seem to turn both the bucket and dasher correctly and we ended up finishing it by hand, so this year I decided to skip the electric motor completely.  It was fun as a new generation joined in on the cranking process and was able to enjoy the result of their work.

After the Christmas gathering we made a trip through Potato Creek State Park to wrap up the day and see what we could find to photograph.  The geese had gathered on the remaining open water of the lake and a number of swans were setting on the ice.  There were a lot of songbirds keeping active in the tall grass and weeds along the roadway as it protected them from the harsh wind.  The eagles and heron were staying out of sight, but we did see a hawk or two as we were ready to leave the park.  The thing that drew most of our photographic effort was the setting sun that began to light up the sky as we drove through the park.  Today’s photo was taken across one of the meadows as the sun’s ball of fire set beyond the treeline. 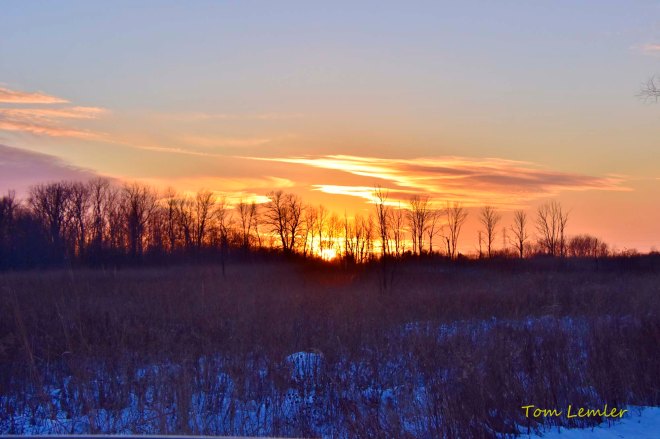