While the moon is nearly full, it is in a cycle where it rises early in the evening and sets earlier than I get up for work.  This means that it is fairly light out during most of the night, but after the moon sets the stars are shining brightly in the early morning hours.  My nights are still very restless for some reason, so I saw a lot of the moonlight during the night before getting up and heading to work.

My early morning prayer, cleaning, and building prep time included a lot of prayer for the many people whose lives have been turned upside down by the attack in Las Vegas.  As I prayed, I continued to pray that the light of Jesus would shine brightly through His children in the mist of this terrible darkness.  I prayed for the courage to be the part of that light that I am meant to be.  I prayed that the people who make up the body of Christ would rise above the divisiveness that has permeated nearly every aspect of our nation — including the church.

Once the building was ready for the day, I began a major undertaking — cleaning off my desk. 🙂  I tend to sort and stack things in piles on my desk as they come in and it isn’t long before the accumulation has completely overtaken my work space.  While appearing, and being, quite cluttered, I tend to know where everything is and can access what I’m looking for rather quickly.  I suspect that if I would get in the habit of putting things away and in files where they belong as they come in I would get used to finding them there, but now that I’ve put everything away it will be difficult for me to retrieve anything very quickly as I have to remember its new location.  While I didn’t get the desk completely cleared of everything, I made good progress and it looks much better even with a few things on it that I haven’t quite figured out where their rightful home should be.

In addition to cleaning, I spent time working on some more of the Growing Strong retreat material and began to let the scripture text for Sunday’s sermon simmer in my mind.  As the workday ended, I stopped for a late lunch on the way home and then spent some time relaxing.  By evening, a light rain had begun to fall so I took my camera outside to photograph raindrops on roses . . . and other flowers.  As I wandered the front lawn, I found an out of season daylily blossom.  It made me think of Paul’s instruction to Timothy to “preach the Word.  To be ready “in season and out of season.”  This blossom may be out of its regular season, but it still proclaims the glory of God and the majesty of His creativity. 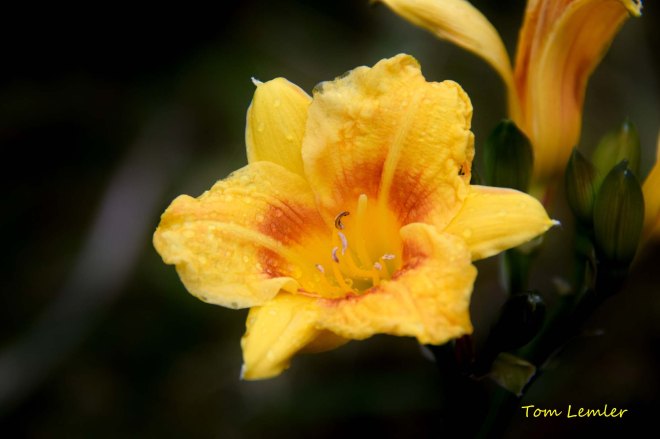