On a day spent with my family, page 185 was a day filled with rest and adventure.  With having the Fourth of July holiday off of work, my morning began late with a cup of coffee and the writing of the previous day’s page.  Once the page was written, I followed up on some future plans and then placed an order for 300 copies of my most recent book.  This 31-day devotional journal, “Living Free”, will complement the theme of the National Student Conference being held in Evansville, Indiana later this month and each student in attendance will be given one.  As I placed the order on what we call “Independence Day”, I was reminded of my dependence on God to both give me the wisdom and words in the writing I do and provide the resources to make the work He has called me to possible.  On this holiday off of work, I am reminded of, and thankful for, my church family at the Deer Run Church of Christ and for my fellow staff members and individuals of the church who help make possible the ministry God has called me to.

With the writing done for the day and the books ordered that I will need, I spent the rest of the morning resting.  I played a few games on the computer and Wii system, shot some photos of the flowers in MJ’s flower gardens, and eventually went out to lunch with my family.  After lunch, my resting shifted gears as we headed out on a holiday family adventure.  Our first stop was at the Hesston Steam Museum.  While not all that far from home, this was our first visit — but likely not our last.  For us, the trains were the centerpiece and we chose to ride the train being pulled by a Shay steam engine.  This was an interesting train engine as its drive mechanism was different from the common image of a steam locomotive.  The design was intended to provide the power and traction needed for for pulling heavy loads of freight through less than level terrain — this particular engine had been used in the logging industry of the western United States.  It made me think of how different some of us look, and are, from one another.  Sometimes those differences are obvious and sometimes they are less noticeable, but I believe God has a plan to use each of those design differences for His purpose and His glory.

After our visit to the steam museum and our train ride, we headed to the coast — the coast of Lake Michigan.  Sometime last summer we had found a little park that was secluded and had good views of the lake, so we drove along the shoreline in an attempt to find that park again.  Unfortunately, we have visited so much of the area searching for beach fronts and lighthouses that we can’t remember exactly what this park was near, so we didn’t end up finding it.  We did however, find another little park that had an overlook of the Galien River and a nice boardwalk through the marsh land out to the river.  We also found a lake front park with a small deck overlooking the lake and a path leading to the beach.  The day was a bit hazy, but it was a beautiful day to gaze out over the lake and take some photos.

With it being the Fourth of July I decided we ought to at least attempt to see a bald eagle, so after leaving the lake we made our way toward Potato Creek State Park as we know there are some eagles living there.  Just before the park entrance, I was watching a field along the road and the white head of a bald eagle caught my eye.  After turning the truck around, we pulled off the side of the road and shot some photos of this eagle feasting on something out in the middle of this pasture.  Today’s photo is of that eagle.  His meal is in the grassy area under him as he is using his talons to grasp it and his beak to tear off pieces to eat.  In what is known as a symbol of freedom in the United States, it was good to see and photograph this eagle living in freedom.  It wasn’t long before he flew off toward his nest and we continued into the park.  While we didn’t see any of the eagles in the park, it was peaceful to watch the sun reflect in the water as it dropped into the evening sky. 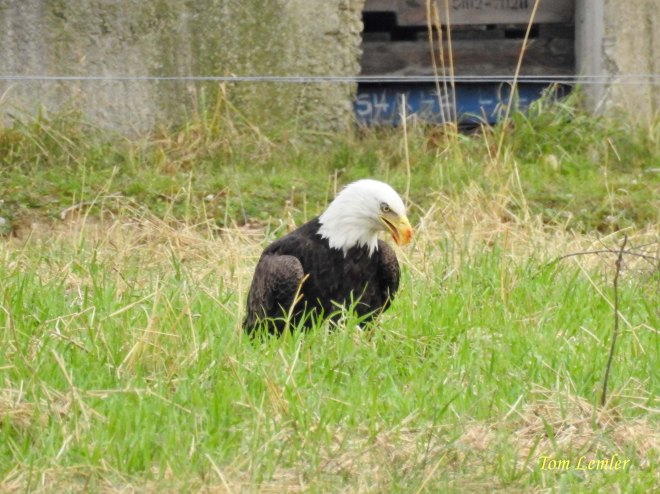