Page 95 was a true spring break roadtrip as we sought to enjoy the day as a family while accommodating the effects of the seizures that Susan had throughout the night and into the early part of the morning.  It is difficult when you don’t experience something to know all the lingering effects it has on the one who does experience it, but observation, listening, and research go a long way toward understanding.  We have read, and observed, that a major seizure will wear a person out with similar effects to the effort put into running a marathon.  It was apparent as we began our day that anything involving walking beyond a very limited necessity wasn’t going to work today.  So, we hit the road in a driving tour, visiting a few stops where we could photograph waterfalls, but mostly enjoying the scenery of a beautiful day that God had given us.

For me, the seizures are always a reminder to enjoy the moment because there is no guarantee of future moments.  The passing years and the joy that Susan has, and gives to all she meets, also reminds me of an encounter with a doctor twenty-some years ago — a doctor that I soon fired.  I was out of town when Susan was hospitalized with a seizure that had gone on for a few hours before they were able to get it stopped.  When I got word, I left the conference I was at and began the 12 hour journey home.  Before I made it to the hospital, the doctor that was assigned to Susan seemed to want two things from Mary Jane — 1) Sign over all care decisions to him and 2) know how we were going to pay for her care.  It wasn’t long after I arrived and got the report of what had been going on that this doctor walked into the room and started in with what we needed to do and why he was the only one that could do it and that he needed a plan that would show payment would be made.  He warned us that people don’t survive multiple seizures of this magnitude and since this was Susan’s second such episode, she was living on borrowed time as it was.  As I remember, he tried to make it sound as if he was the only one who even had a chance of helping her and that he had great success with similar patients.  The first step of “care” would be for us to figure out how her care would be covered and then he would proceed.  I’m not sure what it was — it could have been the all day drive, it could have been the “fight or flight” adrenaline from seeing Susan, it could well have been the hand of God upon me, or it could have been a combination of these and other reasons I know nothing about — but my response was that he was wrong, our first step was finding a new doctor and that he needed to leave the room.  I’m not sure that anyone had ever responded to him in such a manner but he left Susan was put under the care of doctors who actually cared.  I know that is a longer story than I usually write as background to a “page”, but there are a lot of lessons in it that I continue to benefit from even today.  Some of the biggest ones are that no man is God and no man, including me, knows how long we will have on this earth with those we love.  So, with an approaching birthday this summer of twenty-eight years, well beyond anything this doctor tried to tell us she would reach, I continue in my attempts to enjoy whatever days God allows Susan to live with us.

One of our stops was a a park where today’s photo was taken.  While the photo appears to be of an old mill along a stream above a beautiful waterfall, all of that is true except the old part.  Evidently there had been a mill along this stream but not at this particular location and not this mill.  It’s a replica because the old one had fallen out of use and with no one maintaining and using it, it eventually disappeared from the landscape.  It reminded me of old mills that I have photographed that are in their original location and still being used — even if just for tourist and demonstration purposes.  The reason some are still standing and being used while many are not is that someone, or a group of someones, decided to invest the time, money, and effort into maintaining them.  While I enjoy old mills, covered bridges, and other structures that have withstood the test of time, family is more precious than any of them.  There are a lot of reasons that families crumble apart and some of those reasons are beyond simple and may require a tearing down and complete rebuilding as in the case of today’s mill, but many times the reason is simply a lack of maintenance.  To me, spending time with my family and trying to be flexible in caring for the daily needs of each one of us, is a big part of the maintenance that helps us to survive. 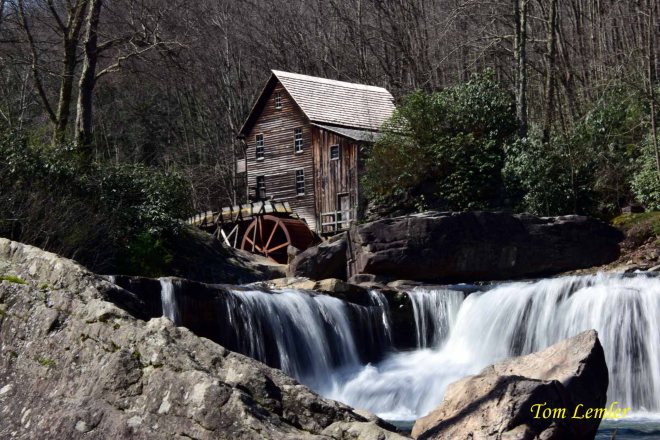