Page 361 continued with the heart of winter as the air temperature made it all the way up to 1 degree by the time I headed out the door to clear snow from the sidewalks at work.  Bundled up with enough layers, it wasn’t too bad being outside and I always enjoy watching the arcs of snow flying from the snow blower.  There is something calming to my spirit when I see the crisp lines of a cleared walk in the  midst of a blanket of snow.

After getting the building ready for use, I headed home to spend some time with my family as the next few days will be very busy getting ready for the weekend with the opportunity to preach and lead a New Year’s Eve prayer vigil.  After lunch we decided to head north to see what we could find to photograph.  Our hope was to cross paths with a snowy owl or two, but knew that would be a bonus if we did.  We had not driven more than a couple miles before we were diverted off the highway due to an accident ahead.  We kept going, though, and drove through times of clear weather with an occasional near white-out due to heavy snowfall.  Our first stop was at Holland State Park in Holland, Michigan where a snowy owl had been reported last week.  We didn’t see an owl, but as soon as I got out of the truck something flew overhead.  I zoomed in with my camera and discovered it was a bald eagle.  Sometimes you don’t see what you expect or hope for, but there are still plenty of beautiful sights if you look.

After photographing the lakefront scenes and the “Big Red” lighthouse at Holland State Park, we headed back toward home with our next stop in South Haven, Michigan to photograph the lighthouse there.  It was cold, but the photo opportunities were worth being out and the truck heater was very functional and welcome relief between stops.  By the time we stopped at Silver Beach in St Joseph, Michigan it was completely dark but I wanted to try a shot or two from the tripod.  Today’s photo is one that I took on manual settings with about a 30 second exposure setting.  From my location, all that could be clearly seen were the occasional flashes of light from the three beacons.  By collecting each of those flashes over a 30 second time period, there was enough light to make the lighthouses and pier visible.  Sometimes we may think our light isn’t much, but if we continue to let it shine we may be surprised at how much God will illuminate with it. 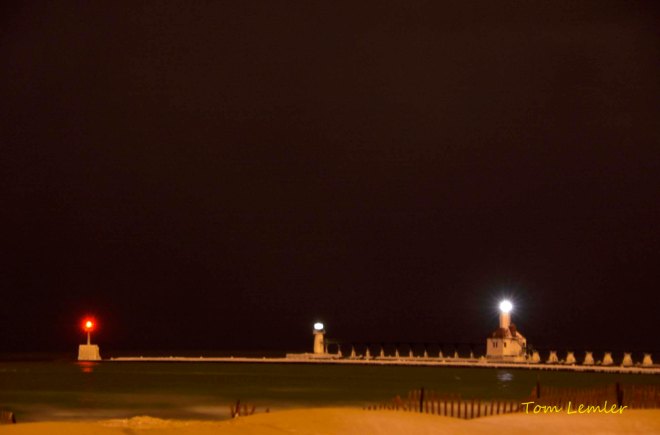