I began page 177 with some breakfast and a cup of coffee before resuming my trip to Kansas City.  My first stop was just down the street from where I stayed as I got in a morning walk through downtown Chillicothe, Missouri.  When I booked my lodging, I noticed that the town was noted for having a variety of giant murals painted on the exterior walls of some of the downtown buildings.  With needing to use up a little time so I didn’t hit Kansas City during the morning rush hour, I took a walk and photographed a number of the murals.

As I drove out of town after my walk, the sky began to darken to the west and pretty soon I was driving in some fairly heavy rain which lasted all the way into downtown Kansas City as I arrived at the convention center.  After unloading my display materials and books, and snagging a couple extra tables from an exhibitor that wasn’t going to use them, I drove around the block and checked into the hotel.  Once my belongings were stowed away in my room, I headed back over to the convention center to work at getting the display set up.  For me, this is usually a process — I set up the basics and then step back to consider how best to fill in the remaining space.  Once it is all “done”, I leave it overnight and let the look of it simmer in my mind — often making at least minor changes first thing in the morning before the exhibit hall opens.

I thought I would take a nap after the initial set-up was done on the display, but it was such a beautiful afternoon that I ended up taking a walk instead.  About a mile into my walk, I began to smell the wonderful scent of BBQ.  Since it was late afternoon and I hadn’t had lunch, the appropriate thing to do was to follow my nose until I found the source of this wonderful aroma.  I chose a chicken and brisket combo plate and decided I may have to find a long enough break during the convention to return and see if their other choices are just as good.  After this late lunch/early dinner combo, I went back through the exhibit hall to see if any changes to the display had come to mind.  It still looked suitable to me and the set-up time for the day was nearly over, so I made my way back to the hotel where I settled in with God to write the prayer guide for next week.  With my latest book, “Living Free”, finished and in the process of being published, and the Fourth of July next week, I settled on the topic of living free for the prayer guide.  With a busy week ahead, my goal is to finish writing today’s page and try to get a good night’s sleep.

Today’s photo was taken from the hotel window this morning.  I had taken a few photos that were basically the top three fourths of this picture — the beautiful blues and whites of the sky and and the various shades of green from the fields and trees.  Then I took this photo which includes the highway that was also part of that view out my window.  While it is important to keep our eyes fixed upward in this journey of life, we also must be aware of the path we are on. 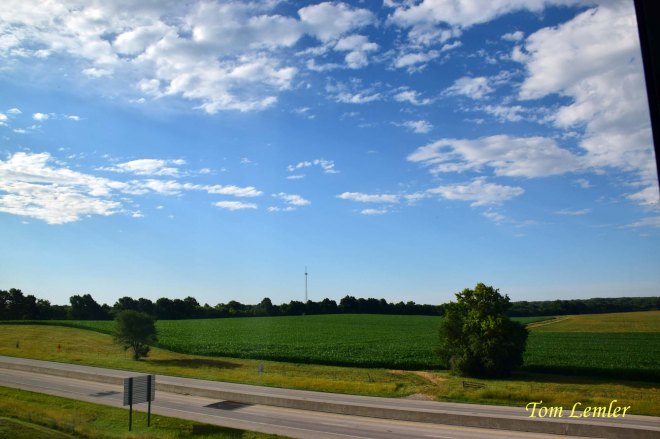